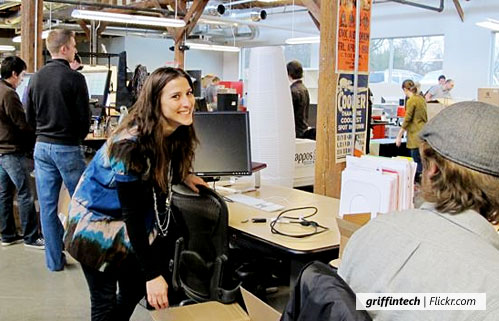 I’ve had a few jobs in my time.  And even though I’m a seasoned professional with 14 plus years experience, I still get nervous about starting a new job.

That first week at a new job can either go really well, or make you totally rethink your new position entirely. Sometimes even your entire career path.

The key to having a great first week is mostly in the hands of the agency. It requires preparation and understanding on the part of the HR team and the hiring managers.

Over the years, I noticed a trend with a lot of the advertising agencies. Once you’re hired, it seems as though everyone is too busy to show you the ropes. And more often than not, orientation of any sort goes out the window. Don’t get me wrong, hitting the ground running isn’t a problem for me, but sometimes, everyone could use a little padding when they land.

The key to having a great first week is mostly in the hands of the agency. It requires preparation and understanding on the part of the HR team and the hiring managers.

Rhoderick Lising, a graphic designer at Station X, Vancouver recently told me that on his first day at the agency, his boss took him – along with a few new colleagues – out for lunch. After that, it was three days of orientation and meetings with key staff. They had even printed personalized business cards printed and ready to go on his first day.

In my experience, a boss taking time out of his or her busy day to have lunch with a new employee is unheard of. But it sounds as though Rhoderick’s new agency put time and effort into preparing a proper orientation for their employees, and everyone was on board with the program.

There are many elements that go into preparing for a new hire – and they can mean the difference between a smooth on-boarding, or a bumpy transition. HR and/or the hiring managers should consider;

These all seem pretty basic, but unfortunately they often get missed.

For example, in one agency we hired an intern. But when she showed up for her first week, she had no computer and no clear definition of what she was supposed to be working on. Not only was this frustrating to her, but it also put a strain on the account managers who were told to ‘keep her busy’. Had she been given a proper orientation and a computer to access email and important files, we all would have had a much more productive week.

Starting a new job is usually a little bumpy and there’s always a learning curve.

Orientation should be a process. Not an event. It should be designed and managed by the hiring manager or the HR contact – not by the new hire.

I started a new job at another ad agency in Vancouver, and was told that for my orientation it would be up to me to go and interview ten random employees within the company. But we were so busy that I was never able to carve out time to get the interviews done.

Putting the onus on new employees to manage their own orientation is not effective. The process needs to be engaging and not overwhelm the new hire. It should make them feel comfortable and welcomed. And above all, it should be personal and meaningful.

HRcouncil.ca is a great resource for hiring managers. They share what a good orientation should look like and give detailed lists of the basic information new hires should know.

Even if you’re not a hiring manager – but the one starting a new job, this can act as an important checklist of things to ask if they’re not provided.

You’ll want to be sure to get;

Starting a new job is usually a little bumpy and there’s always a learning curve. But when a company has a well-laid-out orientation process, it helps to take the pressure off the new hire.

Employers should be prepared to help ease the transition of their new employees into the work environment and get the relationship building off to a good start. If not, understanding and communicating what you need to make yourself feel comfortable in your new role will be key in having a great big fat first week at your new office.