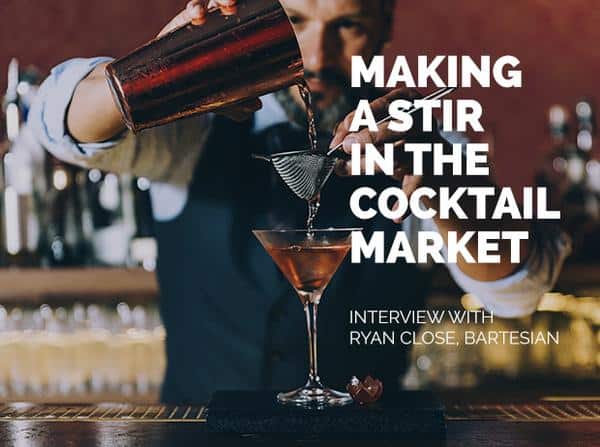 Imagine making a premium cocktail as easily as you can make a cup of coffee. That’s exactly what Ryan Close, Co-founder of Bartesian dreamed about. He is working with a team of product designers, cocktail experts, engineers, and food scientists to create a craft cocktail machine that uses capsule tech to make premium cocktails on demand. Emma Bullen caught up with Ryan to talk about his career path, the Kickstarter campaign, and how he’s getting press for the Bartesian cocktail machine.

Emma Bullen: Tell me about your career path. How did you get where you are today?

Ryan Close: I worked for a few different small/medium enterprise companies around the $100 million mark. My role was to develop sales processes and re-engineer processes to maximize profit. So that was what I did for a decade, and I loved it, but I was always an entrepreneur, and I had a couple of small businesses that I developed and ran on the side that made some money here and there, but nothing enough to retire.

I met Bryan Fedorak, who had a finished developing a prototype for a cocktail machine, and his partner who was recruited from Apple as the solo engineer on the product. Bartesian wasn’t a company yet; they had a great idea for a product, but they needed some help to bring it to life. I thought it was a perfect fit for my skill set and background. We’ve partnered together for about three years now.

EB: Where did the idea for Bartesian come from?

RC: One of our co-founders had a friend who traveled a lot. They were always complaining about the fact that when you arrive late at night, you can always get a coffee, but you can never get a cocktail. You get to your hotel, you want to have a drink, and the restaurant is closed, the bars are closed, and there are some hotels that don’t have restaurants or bars at all. So that’s where the idea came from, and the prototype was actually a university project.

We were in the top 1% of Kickstarter history, so we knew there was some interest from consumers.

It ended up generating a lot of excitement, and we took it to Kickstarter. We were in the top 1% of Kickstarter history, so we knew there was some interest from consumers. That’s when the real work began. We took the prototype and then started iterating on it based on consumer feedback and began raising enough money to bring it to life.

EB: Did you expect the Kickstarter campaign to do that well?

RC: To be completely frank, we had hoped it would be a lot better than it did. It was a Kickstarter staff top pick, and we met our goal, but we hoped it would do raise more money at that stage. When we did more research, we realized that the product was a gift product and consumers rarely go to Kickstarter to buy gifts, because you never know when you’re going to get them.

EB: After the Kickstarter campaign had come to an end, how did you go about getting further funding?

RC: We got some investment from the Ontario Centre Of Excellence, but we needed significantly more, so we had to raise from Angel Investors. We needed to get more traction for a Venture Capitalist to come in, but it was very much still a concept. So we decided to go out and get purchase orders from retailers. We visited all the major retailers, and they loved it. We got orders from tens of thousands of pieces. It was pretty amazing given that we were demonstrating a machine that was put together by hand. We took those purchase orders went to a Venture Capitalist, and they still said, “We love it, it’s exciting but tell me when you have more traction”. So we decided to focus on Angel Investors, and we were really successful.

The next step was to partner with a strategic investor; someone who could provide more than money. We needed someone to help with all the other intangibles such as distribution, market awareness, etc. So we started talking to a couple of large liquor companies. We decided to sign a deal with Beam Suntory who have a great portfolio of products across the brand.

EB: I remember when I saw you talking at Metabridge last year, you spoke about some of the challenges you had getting the hardware made. What was that process like?

RC: The challenges were working with the right factory in China to build the machines to timelines, and then also the work on the capsules, which we figured out quickly were just as, if not more complicated than the machines.

We wanted to figure out how to make something that wasn’t jammed with high fructose corn syrup and preservatives.

I thought at first, you know, it’s juice in a cup, big deal. Well, that was a big error. We needed to hire a team of microbiology scientists because we are not just putting juice in a cup, we are taking the ingredient that makes a cocktail, (less the booze), we’re pasteurizing it, making it food safe, boiling out the excess water and putting it in a cup. It needs to have a shelf life; it needs to taste good. We wanted to figure out how to make something that wasn’t jammed with high fructose corn syrup and preservatives.

It wasn’t that the machines were that complicated, it was that we were splitting our limited resources between two challenging areas. So I took on the capsule side, and Bryan stayed with the machines. That focus has allowed us to get the product completed.

EB: How big is your team now?

RC: We recently hired a CFO; he actually came from Beam Suntory. We had been very open about needing someone with that skill set to help us. Beam Suntory loved it because it protected their investment and it gave this gentleman the opportunity to come in and take a leadership role in a small company that’s growing.

EB: You are getting a lot of press coverage from various news outlets. How are you going about marketing the product?

RC: You know I’d love to tell you I’m this amazing marketer and I know how to drive awareness of a product, but the reality is, it’s been extremely organic. In most cases, the media has contacted us. I worked in several different companies and sold into major retail chains, but never have I been this fortunate.

We want to get the product to people who can see the value of it, create joy for them and their friends, and get some feedback to improve the experience.

EB: So, the million dollar question, how do I get my hands on one?

RC: We’re not in store yet. We are currently assembling 600 units for the Kickstarter folks and those will be going out in the first couple of month to the new year and then we’ll be in retail for the 2018 holiday season.

EB: What would the best 2018 look like for Bartesian?

RC: For me, it would be having a solid group of early adopters who raved about the experience they had with the product and their friends. We want to get the product to people who can see the value of it, create joy for them and their friends and get some feedback to improve the experience. We want to make a product that is good for the end user who loves craft cocktails and can make them at the push of a button.

EB: What’s the best piece of career advice you have ever been given?

RC: Listen more than you speak. It’s clear and easy. As a young guy who thought I knew everything coming out of university, I went into board meetings all pumped up to make changes. But you realize that by sitting back and letting others share, you can move the needle quicker and more efficiently by just shutting up.

EB: What books do you most often recommend to friends?

RC: A decade ago I would have told you things I read about like Winning by Jack Welch. But my wife is a clinical psychologist and meditation teacher, so I have been focused on books about the inner self and self-improvement. I’m a father of three, so I read books like The Inner Works of Mindful Parenting. There are amazing synergies in these mindfulness books and the leadership books I read ten years ago. Being a parent, and a mindful parent is pretty much in line with what you need to be a good leader or a boss.