It's More Than Just Data | Interview with Deborah Hall from Dive Networks | FreshGigs.ca 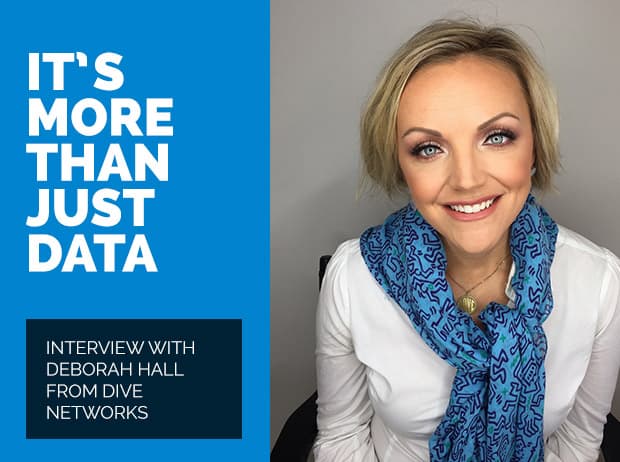 Deborah Hall’s work in advertising, media, and software development has taken her from the world of mobile development to her current role as co-founder and CEO of Dive Networks. Emma Bullen caught up with her to talk about her career path, company culture, and the future of marketing.

Emma Bullen: How did you get to where you are today?

Deborah Hall: My profession is mechanical engineering, but I’ve spent the majority of my career problem-solving in the digital marketing space. Throughout the course of my career, I’ve built engines and plane parts and I’ve worked in advertising, media, and software. I guess you could say that I’ve come full circle. I still work in technology, but now I make software.

EB: How did you find yourself there?

DH: When I started mechanical engineering, I was building products for cars and as part of those projects, you had a tenure gap before your part went into the market. After working on that, I was always trying to shorten that gap of going to market.

I was so happy to find software because you can work on code and can launch it right away. You get the satisfaction of seeing your work and progress in real time.

I followed my peers into software development and I moved from Toronto to New York and eventually worked at Yahoo in Sunnyvale. It was when Yahoo was at its peak in the early 2000s before the mobile device was a big deal. It was a really great place to learn about the Valley and how software was built.

I also did my MBA when I was Yahoo, which really gave me the confidence to start my own company. I realized there were big problems that small companies could solve and a gap that could be filled by something that I could design and build. I started, literally with a piece of paper. I sold my mobile company in 2010 and I’ve learned a lot from that transition to working at a large media company, Torstar. Since 2013, I’ve been back at my latest entrepreneurial venture — DIVE Networks.

EB: Tell me about Dive Networks. What do you do?

DH: We’re a data-driven news network. We provide real-time industry, audience & brand specific news that is uniquely contextual, engaging and entertaining. We’ve been transforming digital screens, outdoor screens, and screens in offices and we solve the problem of communication in offices.

A lot of corporate communications departments spend ages working on powerpoint decks and the minute they put them up, they’re out of date. Our software pulls live tweets and puts real-time content on digital displays so that everyone can be connected with live information.

For factory workers, people that aren’t exposed to digital content it’s a big deal. We put digital content in front of employees who don’t have a computer or can’t access the internet. With these screens it’s much more than data and insights. In a very human way, we are digitalizing health and safety reminders and real-time performance reporting. We also deliver motivational digital content that changes an employees workday. That’s been the fun part of what we’ve been doing.

EB: Did you have any idea that those people would be your customers?

DH: No! In the early days, we were using our backgrounds. I come from a mobile background, my business partners and the team come from the Out of Home and Digital Billboard spaces — the biggest screens, Time Square format. My founding partners bring so much magic to what we do every day.

We were literally solving problems that people weren’t necessarily ready for, pulling content dynamically and showing people data. As we started to look for customers for what we’d built, we realized that there was a huge gap in this corporate communications area. It was an area that digital forgot.

Some of our customers today have 20 floors in high rise buildings around the world, and have no way of instantly communicating with their employees. There are more digital dark screens than ever before. But we definitely didn’t start that way. It’s interesting how it works!

It makes you think about how many products are out there that could be packaged differently and used in a different way.

EB: What data do you display?

DH: Part of our shift and transformation was shifting from producing data on the screen to sharing news and updates.

We made it much simpler. Imagine a FreshGigs broadcast feed, it would look like your own content. You’d be reminded of what you’re posting and how that’s working and you’d have the ability to message employees on the screen in your global locations.

When we simplified it, our product became much easier to understand. We used the same thing we’d build, but for a simpler purpose. Then all of a sudden, people started to say, “Oh, I have that problem.”

It makes you think about how many products are out there that could be packaged differently and used in a different way.

EB: How has your background in marketing helped?

DH: Probably the hustle of it. I don’t know that all engineers are born hustlers; they’re born to build things. I think that working in marketing and advertising definitely teaches you the packaging of a product.

EB: What’s the biggest impact that data’s having on today’s marketing programs?

DH: Data promised us so much. For instance, you can run a Facebook campaign today. You do get what data promised you, it’s very simple. But in terms of formats, the glossy Time Square format, there’s really nothing like that. I don’t know that data solves for all the creativity of advertising.

Brands have not given up on large format ads, or radio ads. Now it’s a matter of sensibly packaging those ads together. Digital marketing forecasts are predicting that large formats, when combined with mobile data will be the next big thing.

EB: How would you describe your company culture?

DH: We’re very adaptable and we set out to do almost impossible things and then pull them off. We’re a rabbit-out-of-a-hat team. We love rallying around something that hasn’t been done before. Culturally that rubs off.

People will often say, “I don’t know how you pulled that off in 20 hours.” It can be a double-edged sword, you’re only as good as your last delivery, but we love it. A lot of us are second or third-time entrepreneurs and we like the thrill of it.

It’s more important to be true to yourself than to paint the perfect LinkedIn profile.

EB: Are you currently hiring?

DH: Right now, we’re growing our capacity in content and moderation. We’re looking for some special content authors who can help us moderate live campaigns on Twitter, but also author content. We are always looking for magic / “rabbit out of hats” types!

We want to build a team that knows the importance and impact of their work, but that can handle the pressure and enjoy the content. When we did the moderation for Canada 150, we saw such heartfelt content. There’s a rush from doing that work if you really like it.

EB: What’s the most useful piece of career advice you’ve ever been given?

DH: The most recent career advice I was given is not trying to fit into the LinkedIn title that someone gives you, but always being yourself. One of my passions is DJing and initially, I wondered how that was going to come across. I’m a technology executive, but I’m also a DJ. It sounds confusing, but I love it. It makes me feel alive. It doesn’t matter what everyone thinks. That’s something that I’ve understood more recently than I did initially. It’s more important to be true to yourself than to paint the perfect LinkedIn profile.

EB: What book do you most often recommend to friends?

DH: The 4 Hour Work Week by Tim Ferris really did change the way I worked. It makes you consider the things you do that are amazing that no one else can do. And really think about how I was spending my time, not just busywork, but what I was actually getting done.

We seem to have this belief that it has to be one way, but life doesn’t always work like that. No one is going to pay you to put the time in. You can solve a problem at any time.