What do blues music and branding have in common? More than you'd think | FreshGigs.ca 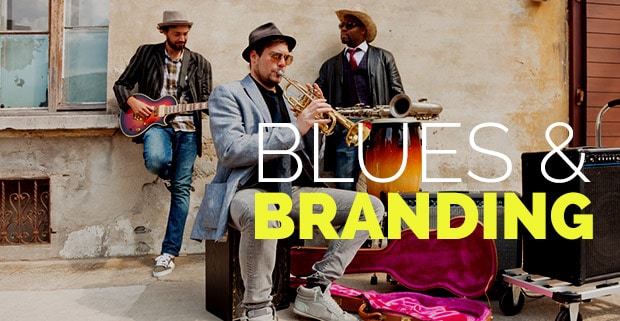 Photo of Band of blues musicians from Shutterstock.

I’ve been a blues music fan forever. I heard Ray Charles sing Hit the Road Jack when I was four, and after that I wanted to play the music and learn more about it. My grandmother gave me a harmonica in my teens and I’ve been playing ever since. There was always something about the music – the attitude, the mystery and the stories in the lyrics that really made an impression on me.

Blues artists are master storytellers. Through their music they tell amazing tales of struggle, sorrow, joy and well…more struggle (it’s the blues after all). Through it all many artists found their own unique voice and have created their own distinctive brand of blues. And with it, adoring fans that follow them and feel a connection to the particular brand of blues that they play.

As a graphic designer and brand strategist, I’ve often thought of the lessons I’ve from listening to my heroes…and I’d like to share them with you, so here are my top three links between branding and the blues.

What I love about the late, great BB Kings’s music is how he could tell so much story and show so much feeling with just a few bent notes. BB knew the power of the “less is more” approach better than anyone. He could have played 10 million notes per song but he didn’t. He understood the impact one  note could have.

This is probably the most important lesson I’ve learned. There is so much you can say about your brand. So many distractions to get you off-track (What are we offering? Let’s list all our software features! What’s the competition doing?)  that you can easily end up trying to play those 10 million notes in your story. Sure, you’re saying a lot but are you connecting to the audience? If you get a bit frazzled, just listen to Mr. King and think about your own one clean note to play.

Eric Clapton is known for his unflappable dedication to the pursuit of the blues almost as much as his playing. Blues music isn’t the fast track to financial success for many; Clapton is immensely successful but I think that if he never even had a hit, he’d still be just as dedicated today playing, learning and talking about the blues. What I always admired about Clapton was his pure passion for the music…and that he makes no apologies for his love of the subject.

I remember watching him do an interview before his From The Cradle tour – right off the success of the Clapton Unplugged album. One of the questions lobbed at him was along the lines of, why an electric blues album? Why not another acoustic, MTV-friendly deal? Clapton simply replied, “I have to see this blues thing through to the end.” And I really loved that answer. He was so devoted to doing his thing, just for the pure love of the art form.

When I’m helping out with business owners with their brand message or differentiator, I want them to find that level of dedication – that level of commitment to what they’re doing. Once they find that passion about why they do what they do and use it in their storytelling, things begin to come together.

If you haven’t seen Buddy Guy play you’re doing a disservice to your ears and eyes. The man plays with such happiness and showmanship it’s infectious. His personality is just as massive as his sound, and the combination makes him such a legend. He’s animated more than a Pixar character; he jokes with the audience and he often strolls the aisles at his concerts, wailing away on his polka-dot guitar.

Confidence in telling your brand story is a lot like great music. People connect to it instantly.

The man has influenced everyone from Hendrix to Clapton to John Mayer and more. When he sings, he’s like a force of nature – but interestingly enough, early in his career he didn’t think he could sing at all. His sister brought him out of his shell and helped him find his voice and confidence. A Buddy Guy song wouldn’t be the same without that powerful voice to go with that blistering guitar.

Buddy taught that that bit of spark – that confidence and inner showman, lies within all of us and helps us tell great stories. People will connect to brands but they also connect to the characters and personalities that are associated to those stories and give them impact. Think of any great Ted Talk and a speaker who may have inspired you with great insights or presence. Business owners don’t have to wear polka dot shirts and play polka-dot guitars, but a bit of swagger and confidence in your story-telling never hurts when it comes to getting your message across. Confidence in telling your brand story is a lot like great music. People connect to it instantly.

So for those who aren’t too familiar with the blues, check out these few inspiring tunes from BB King, Clapton, and Buddy. Make sure to turn your office speakers up to eleven.

Are there any seemingly unusual sources from which you draw inspiration? What kinds of lessons have you learned? Have you applied any of them to your business? We’d love to hear from you. Tell us in the comments section below!