Three ways standup comedy made me a better writer | FreshGigs.ca 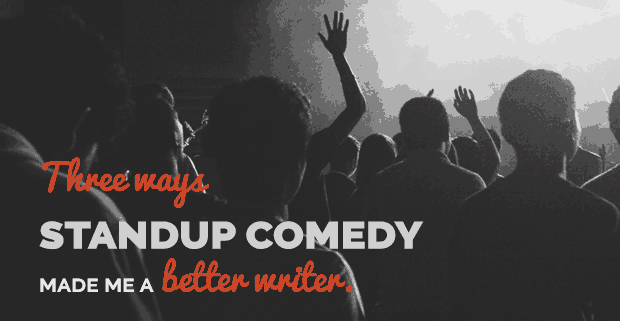 I didn’t have it in me to be a professional standup. Still don’t.

However, I believe that spending two years performing has helped me become a better writer. I would never recommend that you drop everything and try standup comedy (stage time is hard enough to get as it is), but I do believe there are some hard lessons that are useful to every creative professional.

There are some comics who simply get on stage and start talking. They know what they want to say, they just haven’t quite figured it out yet, and they work it out as they go.

Anything that can be cut, should be. You have to edit mercilessly, and only leave the stuff that’s great.

I was not one of those guys.

I over-wrote my act. Every joke was written down and memorized and practiced before I got anywhere near a stage. My fear drove me to be as prepared as possible, and my act suffered as a result.

Sure, I had a couple of jokes that got laughs, but they were surrounded by minutes of seemingly endless chatter, time where the audience may have been listening to me, but they certainly weren’t laughing.

All of that fat needed to be cut, and fast. The leaner an act is, the funnier it gets. The shorter the jokes become, the more people laugh.

The core lesson: anything that can be cut, should be. You have to edit mercilessly, and only leave the stuff that’s great.

I know, I should’ve cut another 30% from this article.

2. Obscurity is a blessing

“No one knows who you are right now. And that’s just fine. Being obscure is a great position to be in. Be happy you’re in the shadows.” – Jason Fried & David Heinemeier Hansson

I took this advice to heart. I was that annoying friend on Facebook that kept sending you invites. I uploaded lots of footage to Youtube.

Louis CK says that it takes 15 years before you start getting close to good at standup. If you’re able to stick at it for that long (I couldn’t), then you will start to get opportunities. You won’t have to self-promote, people will find you. It just takes time.

What I didn’t realise then: when you’re not very good, you shouldn’t try to build a bigger audience. My focus should’ve been on getting better.

The same is true for writing. It’s best to embrace obscurity. Be bad while people don’t notice. Then you can be an overnight success, 15 years later.

3. Be comfortable with failure

“A professional writer is an amateur that didn’t quit.” – Richard Bach

I could write a whole article about bombing and how that felt.

For those of you who don’t know, in standup comedy, bombing is when the audience hates you and everything you say makes them hate you more. It happened to me quite a bit. It is the very definition of failure as a standup comic.

Standup comedy is all about embracing failure. You never know if a joke is good or not until you get up on stage and say it out loud. Sometimes it doesn’t work.

When people hate it, you can’t take it personally. You have to take it on the chin and get back on stage tomorrow.

Otherwise, you’d never perform ever again, and where’s the fun in that?

Writing is the same. This article might be universally despised. 100 people might leave comments saying that I’m a terrible writer.

I’m going to keep going anyway. You should too.