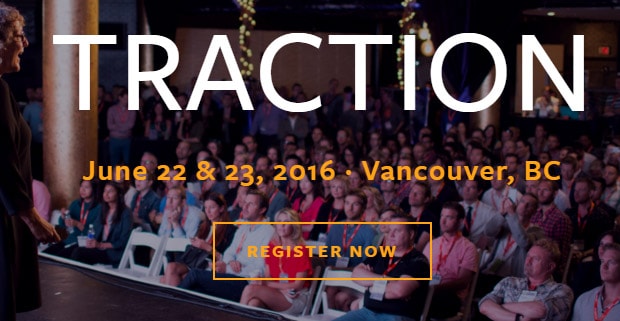 Since its debut in 2015, Traction Conference has successfully garnered international attention. It was named the “best in class for single-day event” by Huffington Post and achieved an overwhelming six-star review. The first conference in Vancouver was so successful that four months later, it was brought to San Francisco.

Traction Conference is known for its high caliber speakers. At more typical conferences, you would expect perhaps four or five keynote speakers. However, in the case of Traction, you’ll be learning from more than 30 C-suite executives and growth experts from some of the fastest growing companies in the past decade such as Airbnb. Dropbox, Marketo, Slack, Hubspot, Zenefits, Pinterest, Lyft, Credit Karma and more.

Without further ado, here are the top five reasons you should attend this year’s Traction Conference.

If you are looking to grow your company to the next level, there is really no other conference that will offer you a full lineup of more than 30 c-suite executives and growth experts from some of the fastest growing companies. Learn from world-class leaders from unicorn companies like Domo, Hubspot, Twitch.tv, MongoDB, Hootsuite, Intercom, Box, Atlassian, The Honest Company, App Direct, SendGrid and more.

This year, the team at Traction extended the conference to two days. Day one will focus on hands-on workshops covering the latest growth strategies in customer acquisition and retention, product marketing, mobile growth, analytics, sales, and more. Day two will be the main conference day with a series of 15–20 min talks on actionable learnings you can implement right away. Think of the two days as obtaining your MBA in growth for only $599!

With fundraising becoming more and more difficult, startups must adapt and learn how to attract more customers, activate them into advocates and monetize strategically. There’s no better time to engage in these dialogues than with 600 like-minded growth professionals over drinks and h’orderves.

4. Be a part of bridging the knowledge gap between Silicon Valley and British Columbia

When you attend Traction Conference, you have a duty to pass on the knowledge you learn from Silicon Valley-based growth experts to your team so you can compete on the global stage together. When you pay it forward, our ecosystem becomes stronger, and everyone wins.

5. Your ticket proceeds go towards cultivating the next generation of entrepreneurs

Traction Conference is organized by Western Canada’s leading tech incubator, Launch Academy. As a nonprofit, Launch Academy strives to help early-stage entrepreneurs succeed. Since 2012, Launch Academy has helped over 400 companies and they’ve collectively raised over $80 million dollars and created over 750 jobs. Your ticket proceeds will make a direct impact in supporting more job creations in BC.

Use the promocode FRESHGIGS10 to get $60 off your Traction Conference ticket!

Any questions or or comments about this, or any other conference?  Share them in the section below.